European angler Wilfred decided to visit IT Lake Monsters Predator fishing lake during his Thailand holiday.
On arrival at the lake the angler started by lure fishing for the predators and was soon connected to his first predatory fish of the day in the shape of an Alligator Gar.
After unhooking the small Gar in the water Wilfred continued casting a variety of lures at the many showing predators.
It was not long after that an Asian Redtail Catfish took an interest in the anglers lure and powered off towards the other side of the fishing lake.
The Asian Redtail Catfish was estimated weigh around 8kg’s and was quickly released once again back into the fishing pond.
Further casts produced more Alligator Gar, Pacu and Sorubim before it was time to change over to deadbait in the afternoon.
After changing over to deadbait in the afternoon the anglers was soon attached to a hard fighting Amazon Catfish which powered off across the lake characteristically hugging the bottom.
After a ten minute battle the Redtail Catfish was finally brought to the waiting landing net and hoisted onto the grassy bank.
The Redtail Catfish was estimated to weigh 20kg’s and was proudly held up for the camera behaving impeccably for the camera as usual.
After releasing the Redtail Catfish back into the predator fishing lake the angler continued fishing with deadbait to take several more Redtail Catfish in quick succession weighing between 15-22kg’s.
As the days predator fishing at IT Lake continued the angler landed several other exotic predator species which all took a liking for the anglers freelined deadbaits.
At the end of the days Thailand predator fishing trip Wilfred had landed over 15 monster fish topped by some beautiful Amazonian Redtail Catfish to around the 28kg’s region 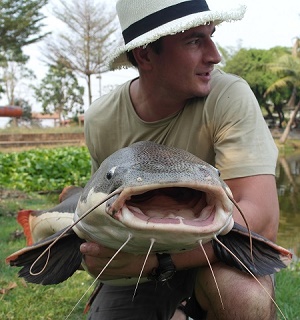