The second day of Ryans Thailand fishing holiday saw the angler once again fishing at Palm Tree Lagoon in Ratchaburi.
After landing a good sized carp on the previous day the angler cast out his rods in readiness for more action.
The first rod to receive a take was the predator rod fished to a quiet marginal spot.
With the rod bent well into the unseen predator it charged off along the margins.
Several minutes later a large set of whiskers could be observed revealing the culprit to be a Vundu Catfish.
The Vundu Catfish was estimated to weigh 12kg and released after a few trophy shots.
A gentle tentative take on one fo the carp rods soon saw Ryan attached to another fish.
The fish on this occasion did not display a great deal of power and was beaten after only a few minutes on the heavy carp outfit.
On netting the fish it was observed to be a very special capture.
A Vulture Catfish was proudly displayed for the camera in all its glory.
Weighing only 4kg’s this incredibly rare species is one of only two stocked into Palm Tree Lagoon.
Ryan continued fishing for the rest of the day catching several more Redtail Catfish in the convening hours 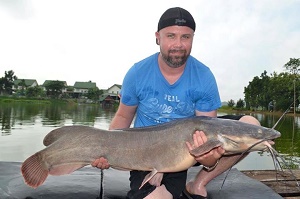