Another trip to the Mae Klong River in Thailand saw a PTL client fishing for Giant freshwater stingrays.
It was not long before the angler was fishing a wide featureless section of the tidal river.
After only an hours fishing one of the floats burst into life and the first stingray of the day was hooked.
A long drawn out battle followed which saw the angler trying to bring the Giant freshwater stingray off the bottom.
The fish was finally brought to the net forty minutes after being hooked to reveal a monster stingray of 1.85m in width.
The stingray was estimated to weigh 200kg and was quickly returned to the river.
Shortly after another take saw one of the other floats moving off downstream.
The stingray on this occasion was beaten fairly quickly and measured at a width of 1.53m.
With a few hours fishing time still remaining the angler went on to hook another even bigger fish.
The battle on this occasion lasted around 1.5 hours and resulted in the capture of a Giant freshwater stingray with a width measurement of 2.02m.
The large female Giant freshwater stingray was estimated to weigh 230kg and was released after photography 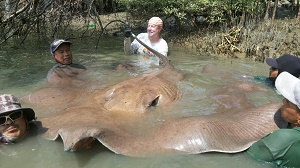