Bruce an angling writer from New Zealand decided to book a days lure fishing for Arapaima at Amazon BKK 2.
On arrival at the lake the angler was greeted by lots of Arapaima topping out in the centre of the lake.
Using swim baits the angler carefully cast towards a good sized Arapaima.
After several retrieves the angler was soon attached to a hard fighting Arapaima which immediately launched itself from the water.
The Arapaima was landed after a short but exciting fight and was estimated to weigh 35kg.
Bruce fished into the afternoon with further casts resulting in more Arapaima’s.
At the end of the days Arapaima fishing at Amazon BKK2 the angler managed to land a further five fish topped by a 45-50kg specimen in addition to losing a similar number due to the Arapaima shedding the hooks from their bony mouths. 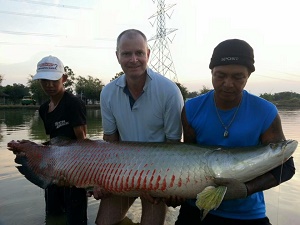