Peter an English angler and friend of Managing Director Boy visited the mighty Bungsamran Lake in Bangkok. Using a roving stalking approach the anglers fished with goldfish livebaits with the intention of hooking a large Arapaima that regularly surfaced in a quiet corner of the lake. Later that afternoon Peter?s goldfish livebait was engulfed by a massive Arapaima Gigas which headed immediately towards the sanctuary of a nearby bungalow. Expertly Boy freed the braided line from the obstruction allowing the battle to continue! After a short adrenaline filled fifteen minute battle the Amazonian giant was netted with the assistance of local expert Mut and taken to shallower water to be photographed. Peter opted to not weigh the fish preferring to return the monster without the possibility of harming this mighty ancient warrior! The fish was estimated to weigh in the excess of a whopping 100kgs and was safely released 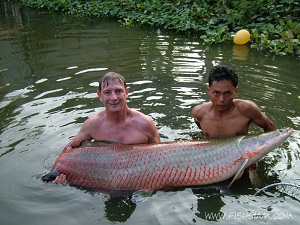