The second day of Arapaima fishing at IT Lake Monsters in Thailand saw the German anglers once again starting on the lure.
Casting a mixture of Rapala and Cultiva lures at showing fish soon saw them landing several Alligator Gar’s to 14kg’s.
Further casts resulted in several small Redtail Catfish which fought every inch of the way to the net.
After changing over to deadbait’s the anglers began steadily baiting several quiet marginal spots with dead fish.
It was not long before one of the rod ripped off as a decent sized Arapaima charged away with the fish bait.
Winding down into the fish saw Ulf’s companion attached to a good sized Arapaima which embarked on a series of powerful heart stopping runs.
On several occasions the Arapaima breached the surface wildly shaking its head before diving back down into the depths once again.
After a ten minute battle the Arapaima rolled close to the bank where it was promptly cooped into a large landing net.
After being allowed a short while for recovery the Arapaima was raised above the recovery cradle for photography by the proud captor.
The Arapaima was estimated to weigh between 35kg’s+ and was released after a few quick trophy shots.
Further casts with the dead bait saw the German pair adding another dozen Redtail Catfish to their haul with weights ranging between 15-30kg’s.
As the days predator fishing was coming to an end Ulf struck into yet another Arapaima which powered off with the bait.
The Arapaima was soon brought under control after a short five minute battle and was placed into the recovery cradle.
The Arapaima on this occasion as estimated to weigh 25kg’s and was quickly returned after trophy shots.
At the end of the days Arapaima fishing at IT Lake the anglers had both banked decent sized Arapaima in addition to a large twenty fish haul of Redtail Catfish and Alligator Gar. 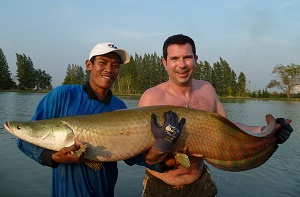