Bangkok angler Brendan visited Dream Lake in Chiang Mai province in Northern Thailand on another fishing trip.
Brendan fished three rods with 4oz Fox Method Feeders loaded with locally produced groundbait.
Super sharp Owner hooks were popped-up 3 inches off the bottom with foam and fished over a large bed of particles and groundbait.
For the early part of the day the lake was extremely quiet without a take coming to the anglers rods.
After continually topping up the swim with bait for several hours it soon became apparent that fish were feeding over the heavily baited area sending plumes of bubbles up to the surface.
After waiting patiently throughout the day Brendan finally received a take on one of his rods.
The fish moved quickly towards the centre of the lake where it proceeded to make a series of powerful runs stripping yards of line from the anglers spool.
Fifteen minutes later a Giant Siamese Carp estimated to weigh 15kg was expertly netted by Boy.
With fish clearly still feeding over the heavily prebaited area the anglers repositioned the rods back in the hot area.
One hour later Brendan’s right hand rod rattled off again with another Giant Siamese Carp racing towards the centre of the lake.
Another short ten minute battle followed which saw the carp heading towards some submerged snags on the far bank. After clamping down hard on the spool the fish was finally turned away from the danger area.
Minutes later another almost identical carp was brought to the net estimated to weigh 15kg’s.
With the rods rebaited and back fishing again the angler didn’t have long to wait before another take materialized.
Yet again the fish moved off at speed towards the snags!
Brendan upon winding down on the fish immediately felt a much heavier resistance and applied as much pressure as he dared in an effort to keep the fish clear of the snags.
A thirty minute battle ensued which saw the fish making a series of unstoppable runs and requiring the angler to move further up the bank in an attempt to regain line on back onto the reel.
After several fraught minutes a Giant Siamese Carp was finally netted and placed on the unhooking mat. The fish was estimated to weigh 25kg’s and was released after photography.
The rods were repositioned and the anglers once again topped up the swim with more groundbait.
Fish continued to top over the baited area but it would be two hours before the hookbait was finally picked up.
After a short ten minute battle another Giant Siamese Carp estimated to weigh 14kg’s was netted by Boy.
This would be the final fish of the evening with anglers returning to the onsite bungalows in readiness of an early start the next morning. 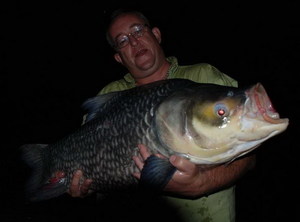