Mathew from the UK decided to spend a short day session fishing Bangkok at Bungsamran Lake.
On arrival at Bungsamran Mathew and a friend began fishing from the public bank for the many Mekong Catfish regularily showing in the centre of the lake.

Fishing with two rods set up on sliding float rigs the anglers packed groundbait onto the feeders before launching them towards the showing catfish. It did not take long for one of the floats to be dragged under the surface as a Mekong Catfish rapidly powered off with the bait. Winding down into the unseen Catfish saw the rod arched over as the fish continued on its unstoppable run. A highly eventful battle followed which saw the angler fighting a good sized Mekong Catfish of an estimated 25kg’s.

Further casts towards the centre f the lake resulted in a succession of Mekong Catfish and Striped Catfish which tested Matt and his companion to their absoloute physical limits. After a short break for lunch the angler resumed fishing and was soon attached to more Mekong Catfish with weights ranging between 20-30kg’s.

At the end of the days Mekong Catfish fishing in Bangkok the angler had amassed a large double figure haul consisting of Mekong Catfish to 30kg’s in addition to several Striped Catfish between 10-15kg’s. 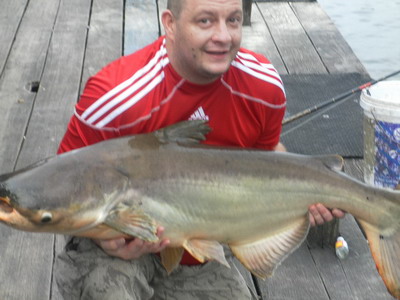