English angler Richard Larkin returned once again to Bungsamran Lake in Bangkok in search of Carp and Catfish.
Fishing from the public bank the UK angler offered 4oz Fox Method feeders attached to short braided hooklengths with sharp Owner Hooks.
Richard fished to a previously baited area close to the supports of the wooden walkway and lightly baited with locally produced groundbait.
After fifteen minutes the angler was into a fish as a Mekong Catfish powered off towards the centre of the lake.
Richard applied maximum pressure and slowly wiched the Mekong Catfish back towards the net.
A few fraught seconds followed as the fish tried to evade the waiting net. Finally the fish was netted and brought onto the unhooking mat.
The fish was estimated to weigh 23kg’s and released after a few quick photographs.
After repositioning the rods Richard was soon into another fish with a Striped Catfish of some 10kgs being netted shortly after.
Richard caught steadily throughout the day catching numerous Striped and Mekong Catfish with weights ranging between 9-25kg’s.
After fishing a short eight hour day session Richard had amassed a twenty fish capture comprising of Striped and Mekong Catfish 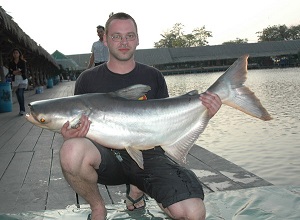