UK angler Roger started his Thailand fishing holiday with a fishing trip to Bungsamran Lake in Bangkok fishing for the mighty Mekong Catfish.
On arrival at the lake Roger decided to fish from a private stilted bungalow in a quiet corner of the lake to avoid the many local anglers on the public bank.
After setting up sliding floats on two rods the angler cast out towards the hordes of Mekong Catfish showing at 40 yards.
Within seconds of the floats landing one of the floats dipped beneath the surface and line began to stream from the reel.
Winding down into the fish saw the rod violently bent into its full battle curve as the unseen Mekong Catfish powerfully charged towards the other side of the lake.
The battle continued for several more minutes before the Mekong Catfish was finally brought into netting range.
On nearing the supports of the fishing platform the Mekong Catfish made one last surge for freedom causing the angler to haul the fish away from the danger area.
The Mekong Catfish was hauled onto the unhooking mat before the hook was removed and held aloft for the camera.
The muscular Mekong Catfish which was estimated to weigh 25kg’s was quickly slipped back into the lake moments later.
Roger fished for Mekong Catfish for the remainder of the day and caught monster fish continually throughout the afternoons angling.
At the end of his days Mekong Catfish fishing at Bungsamran Lake in Bangkok Roger had amassed a massive twenty fish haul of Mekong and Striped Catfish with monster fish to an estimated 30 kg’s. 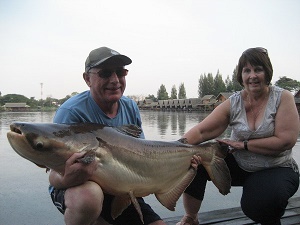