After previously fishing for Catfish Bangkok , Ulf and his friend decided to fish with carp tactics presenting large balls of groundbait hard on the bottom with super sharp owner hooks popped up off the bottom with foam.
Regular baiting of a marginal area close to structure soon began to reveal that fish were visiting the area with several savage line bites pulling line from the open spools of the reels.
A high speed take soon saw Ulf attached to an unseen fish as it rapidly exited the swim.
Ulf played the fish relatively hard in an attempt to keep it away from the submerged structure of the fishing platform as the fish powered off along the edge of the fishing platform.
After steering the unseen Giant Siamese Carp away from the snags the fish kited out towards the relative safety of the centre of the lake where it chugged around for several minutes.
After quickly changing direction the fish powerfully headed back in the direction of the fishing platform causing a large bow wave to appear out in the lake.
Seconds later the rod sprang back as the hook pulled out of the soft mouth of the carp causing the angler to contemplate just how big the unseen carp had been.
After regaining their composure the anglers rebaited the rods and awaited further developments.from giant carp and catfish.
Several Striped Catfish followed with relatively low weights between 8-12kg’s before the swim went quiet for almost an hour.
Regular baiting of the swim soon began to pay off as several larger Mekong Catfish were landed with weights between 20-30kg’s.
After another lull in action one of the rods indicated another high speed take which saw a mass of bubbles appear over the baited marginal area.
This time Ulf’s fishing partner took control of the rod and once again steered it away from the submerged supports of the fishing platform.
The unseen carp made a series of unstoppable runs along the length of the fishing platform causing the angler to follow the fish along the platform applying maximum pressure to keep the carp from reaching the snags.
Once again the carp was steered to safety by the angler only for it to charge back towards the danger area again.
The angler once again applied maximum side strain in an attempt to slow the carps run causing the carp to break through the surface layers to reveal a monster Giant Siamese Carp of well over 45kg’s!
Another powerful charge by the carp saw it entering the snags with the angler unable to stop the fish. Moments later the line parted against the wooden supports of the platform leaving the anglers totally dejected!
After losing two carp the anglers were keen to continue fishing and soon recast their rods to the baited area.
Mekong Catfish soon started homing in on the baited area and the anglers started catching several more decent sized Catfish.
As the day wore on the anglers continued to land a succession of Mekong and Striped Catfish upping their haul well into double figures.
At the end of the days fishing at Bungsamran Lake Ulf’s friend hooked a slightly larger Mekong Catfish which tore off across the lake.
The angler played the fish for almost ten minutes before it surfaced just out of netting range. Slowly but surely the Mekong Catfish was eased towards the waiting landing net before being cooped up by the guide.
The Mekong Catfish was estimated to weigh 40kg’s+ and was released shortly after pictures were taken. 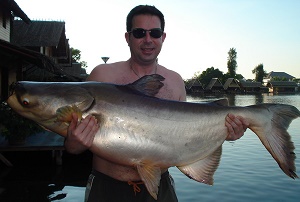