US angler Phil visited the highly prolific IT Lake Monsters Predator fishing lake in Ratchaburi in search of giant Arapaima and other monster freshwater fish.
On arrival at IT Lake Monsters the US angler began fishing with a medium weight lure fishing outfit and immediately started picking up Alligator Gar and Pacu.
The US angler adopted a mobile approach which saw him stealthily moving around the lake after making a few exploratory casts of the lure into each swim.
As the mornings Thailand predator fishing continued the US angler caught further Sorubim and Redtail Catfish to an estimated 25kg’s.
Regularly changing his pattern of lure kept the angler in touch with the predators and saw various monster freshwater fish being landed by the American angler.
A change over to deadbait in the afternoon after a slow thirty minutes saw the angler once again into more monster fish with Asian Redtail Catfish and Redtail Catfish all taking a liking to his carefully presented mackerel fillets.
Lightly baiting on a regular basis with small amounts of deadbait kept the predators in the area and saw the angler landing a succession of hard fighting Redtail Catfish to just shy of 30kg’s.
The predator fishing action continued throughout the days fishing with Redtail Catfish to an estimated 28kg’s in addition to Chaophraya Catfish to 20kg’s falling for mackerel fillets fished at various depths below large floats.
The US angler changed between float fished baits and deadbait fished hard on the bottom as the afternoon’s predator fishing progressed and continued to add more monster fish to his rapidly growing haul.
Phil continued to catch right up to the end of the day’s Thailand predator fishing adding further monster fish species such as Sharptooth Catfish to his large haul of monster fish.
At the end of the days angling Phil had amassed a gigantic haul of freshwater predators catching a twenty eight fish haul consisting of Redtail Catfish to 30kg’s, Chaophraya Catfish to 20kg’s+, Pacu, Alligator Gar, Sharptooth Catfish and hard fighting Sorubim. 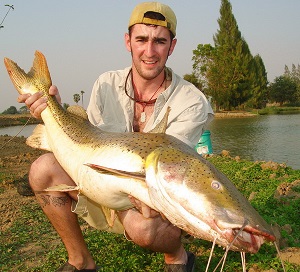