Dave from the UK continued his fishing holiday in Thailand with a visit to Palm Tree Lagoon fishing for Giant fish.
After catching several Giant freshwater stingray’s in the preceding days fishing UK angler Dave continued his ongoing quest for Giant fish in Thailand with a visit to Palm Tree Lagoon.
Dave fished a combination of predator and carp fishing methods and was soon rewarded with a decent sized Redtail Catfish not long after starting fishing.
With several large Arapaima or Pirarucu present in the lake with weights to world record proportions which regularily showed at various parts of the lake the angler waited patiently for events to unfold.
After baiting a large marginal area with locally produced groundbait the carp rod soon ripped off as a Giant Siamese Carp rapidly exited the swim.
Dave played the carp expertly and soon had the Giant Siamese Carp chugging up and down the nearby margins.
After several further minutes the carp was brought to the waiting landing net where it was scooped up on the first attempt.
The Giant Siamese Carp was estimated to weigh 22-25kg’s and was quickly photographed before being released.
As the days fishing at Palm Tree Lagoon progressed Dave added further Redtail Catfish and other monster species to his account.
Unfortunately the Arapaima or Pirarucu did not make an appearance on the bank during the UK anglers fishing session at Palm Tree Lagoon.
With another day’s fishing still left at Palm Tree Lagoon the UK angler retired to the hotel in readiness for the next day’s monster fishing session. 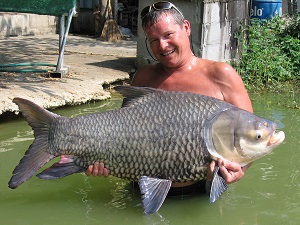