Another visit to the Mae Klong after a recent blank session saw Expat angler Andrew fishing once again with Tim from Palm Tree Lagoon.
After bagging up at Palm Tree for a few days the anglers were soon fishing a very wide part of the tidal river with floats placed at various points its width.
After several hours the anglers received a strong and determined take on one of the floats.
On winding down into the unseen Giant freshwater stingray the rod was pulled powerfully into its full curve where it would remain for the next hour and a half.
Over the course of the next ninety minutes, Andrew battled against the river monster as it embarked on several unstoppable runs before clamping firmly onto the riverbed for long periods.
The Giant freshwater stingray was clearly a large fish that used its weight and mass to its full advantage during the battle.
With the duration of the fight now going reaching 1.5 hours the angler pulled one last time.
The Giant freshwater stingray released its grip on the bottom and was brought into mid water beneath the boat.
Several fraught minutes followed as the stingray was slowly winched up off the bottom.
Finally the river monster was brought up over the waiting net and secured alongside the fishing boat.
After transporting the stingray to the bank-side the Giant freshwater stingray was measured at a width of 2.16m and estimated to weigh 230kg’s.
The river monster was proudly displayed by the captors before being photographed and released back into the Maeklong River 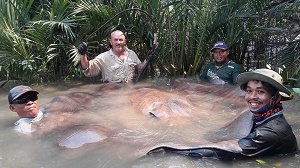