After an eventful day stingray fishing at the Maeklong River, Fredrik changed over to slightly lighter tackle for a fly fishing trip to the Barramundi ponds.
On arrival the angler wasted no time in casting a fly towards showing fish and was instantly rewarded with a take that saw the rod tip being pulled towards the pond.

The Barramundi immediately became airborne as it launched into an acrobatic routine to dislodge the fly.
After several wild head thrashing jumps the Barramundi was soon subdued and netted by the guide.

Further casts resulted in yet more Barramundi as they greedily homed in on Fredriks carefully presented flies.

The afternoons fly fishing yielded non stop action to the European angler with Barramundi regularly visiting the net with weights ranging between 3-5kg’s.

After a short break for lunch fishing resumed and saw Fredrik slowly making his way round the series of ponds casting his fly in any likely looking areas.
Barramundi continued to hit the anglers flies with several fish approaching the 6kg region.

After fishing into the afternoon with very little shade or cover the angler decided to end the days fly fishing at the Barramundi ponds.
His total tally for the day was over thirty hard fighting Barramundi with weights ranging from 3-6kg 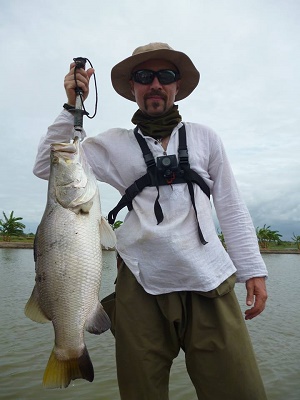