Eric Tan a visiting angler from Singapore visited the Barramundi ponds in Chachoengsao.
Eric used # 9 and # 4 Fly fishing outfits and fished various ponds on the complex using a variety of flies.
The Singaporean angler expertly cast his flies for a short five hour session and captured numerous hard fighting Barramundi with weights between 4 to 6kg’s.
After fly fishing for five hours Eric had amassed a massive thirty two fish haul with several 6kg fish being tempted by the anglers delicately presented flies.
Eric’s haul is one of the largest hauls of Barramundi ever caught by a Fly fisherman from the Barramundi ponds during a short five hour day session 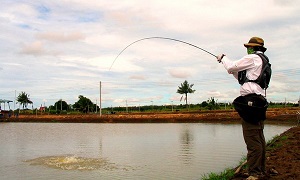