Visiting angler Thierry started his Thailand holiday with a visit to the Maeklong River fishing for freshwater stingrays.
On arrival at the river after spending a few days in Pattaya, Thierry and his companion were soon positioned on a wide section of the tidal river with floats in place.

After a few hours the river had risen considerably and a take was received on a bait fished just off the central channel.

Winding down onto the unseen Giant freshwater stingray saw the heavy duty fishing rod pulled into its full curve as a the fish moved away powerfully stripping lots of line off the multiplier.
A long drawn out battle followed which saw the angler applying as much pressure as was humanly possible.

Capitalising on the moment Thierry hauled for all his might and managed to bring the stingray into the middle layers.
It took a further ten minutes before the Giant freshwater stingray was finally netted.

On bringing the Giant freshwater stingray to the riverside the stingray was measured at a width of 1.85m and was estimated to weigh 190-200kg’s 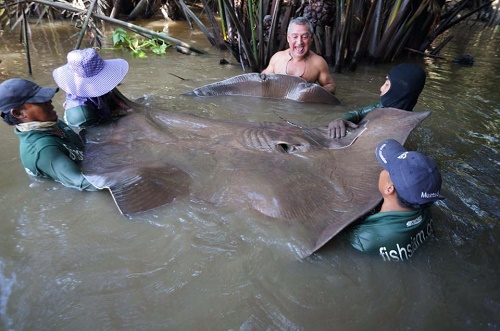