Rick and Boy ventured back to the mighty Maeklong River in Western Thailand fishing for Giant freshwater stingrays.
After a short boat trip up river to the infamous Area 51 stretch near Amphawa the anglers hooked and successfully landed a Giant Freshwater Stingray which was beaten after a relatively short thirty minute battle. The prehistoric Giant freshwater stingray was boated in mid river and photographs were taken.
As has happened so many times in the past when out in the field weighing of the fish was not possible. An estimate of 45 kg was placed on the Giant freshwater stingray.
The stingray was identified as being a small female. The anglers were aided in the capture by FishSiam team members and friends Sa, Pak and Ow. This capture was featured in Pike and Predator magazine in the U.K. 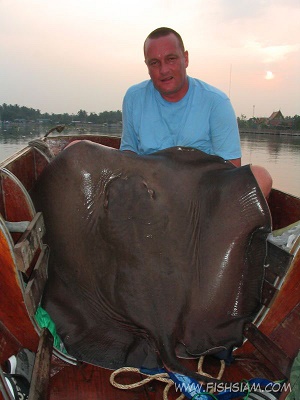