With water conditions looking good the angler waited patiently for the stingrays to arrive.

One of the floats was seen to be moving slowly against the current and after retrieving the bait it was observed to have been crushed beyond recognition.
Clearly the stingrays were now in the area.

With the tide still not at its highest point another float suddenly burst into life, on winding down into the fish on this occasion it was apparent that a decent sized stingray was now attached to the angler.

Jerimiah wound down into the unseen stingray causing the rod to take on its full battle curve and the boat to slowly be pulled downstream.

Further pressure piled onto the stingray slowed the fish’s run causing the fish to deeply embed itself in the muddy substrate eighteen metres below.

The boat was moved to a different position and pressure was once again applied from above. For several minutes the angler and stingray remained in a stalemate and then slowly but surely the angler started to regain line back onto the big Okuma Multiplier.

After putting possibly a yard of line back onto the reel the stingray responded by removing it again in a matter of seconds.

The battle raged on for almost an hour before the angler finally managed to bring the fish off the bottom.
With the fish now gliding around on a tight line beneath the boat great care was taken to slowly bring the stingray up to the waiting net.

On breaking through the surface layers the Giant freshwater stingray went berserk wildly flailing its whip like tail.
The tail was quickly made safe and wrapped and the boat side net tightly
secured on the side of the boat.

After transporting the Giant freshwater stingray to the riverside it was measured at a width of 1.75m’s and estimated to weigh 180kgs. 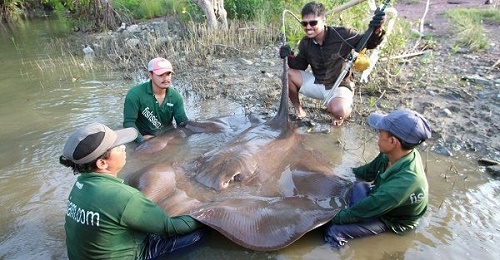