Rick and Boy visited Bungsamran Lake in Bangkok. Fishing from a private bungalow the anglers tried to tempt one of the lakes larger Arapaimas.
With the lake exceptionally busy and a lot of anglers at the lake the Arapaima proved to be extremely hard to tempt. After a rather unproductive morning fishing, the line on one of the livebait rods suddenly jerked into life! Instantly on striking the rod the angler was in contact with a fish, after a matter of seconds it became apparent that this was no Arapaima! Minutes later a Giant Snakehead was expertly netted by Boy. Although not the anglers intended target this fish was an extremely large example of the species. The fish was weighed at 7 kilos and returned to the lake. 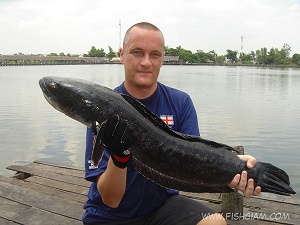