Fishsiam pro-guide Jeab visited the daunting 600 acre venue in the Minburi district of Bangkok in search of the fearsome Giant Snakehead.
The angler adopted a mobile approach fishing from our on site boat and casting a variety of lures in an attempt to capture the elusive Giant Snakehead that inhabit this massive freshwater fishery.
After catching several small specimens the angler’s lure was finally hit by a much larger and more aggressive fish requiring the seasoned lure angler to give line on several occasions.
After a frantic ten minute battle the ferocious predator was finally brought alongside the boat before being expertly scooped up by Jeab.
The extremely large specimen was found to be in perfect condition and was estimated to weigh 6.5kg’s+.
The fearsome predatory fish was released after photography 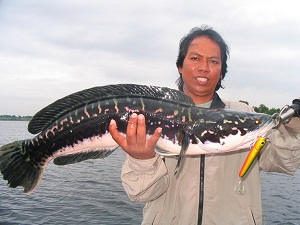