Thailand Lure fishing at IT Lake

Andy and Ted returned to Thailand fishing at IT Lake Monsters and were soon both playing fish on their lure fishing outfits.
Casting their lures to showing fish the anglers slowly teased the artificials through the water in an attempt to hook one of the many predators showing out in the lake.
Fishing with medium weight lure rods the anglers enjoyed short highly energetic battles with both anglers landing a Pacu and Alligator Gar minutes later.
Covering the water in their immediate vicinity the anglers varied their rates of retrieve and lure pattern in an attempt to induce a take.
After making several exploratory casts the anglers would move on to the next spot until they hooked into fish.
Further predators were hooked and brought to the bank with Andy and Ted catching good sized Sorubim and small Redtail Catfish.
As the afternoon closed in the lure fishing began to slow down with only a few takes from Alligator Gar in the last hour.
Changing over to deadbaits the anglers mounted mackerel fillets onto sharp Owner hooks before under arming the baits to the nearside margins.
Chumming lightly over the spots soon had fish in the area with large swirls appearing above the baited hooks.
A strong and determined take on one of the rods soon saw the anglers bent into a bigger size of fish.
The unseen predatory fish moved away very powerfully across the lake hugging the bottom tightly.
The unseen fish charged around the lake for several minutes before the angler could gain some form of control.
After several minutes the fish was played to within a few metres of the bank were it rolled over to reveal a bright red tail.
The Redtail Catfish dived back down to the lakebed in another powerful surge and began to plough up and down the margins for a few more minutes.
The fish was finally brought to the waiting net and hoisted onto the grassy bank.
The immaculate Redtail Catfish was estimated to weigh 28kg’s and was released after a few trophy shots.
Both anglers fished until only 5pm due to other non angling commitments and caught further Redtail Catfish to 20kg’s and several other species of exotic predatory fish.
At the end of the Thailand fishing trip both anglers had caught a double figure haul topped by some quality Redtail Catfish to 28kg 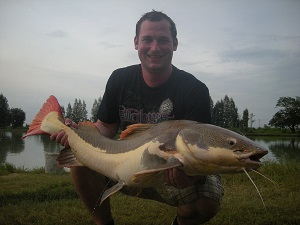