Geoff Maynard from fishingmagic.com in the UK made a short visit to Bungsamran Lake in Bangkok whilst travelling in Thailand. After arriving on an early morning flight Geoff made his way to Bungsamran Lake for a short afternoon session.
On arrival at the lake Geoff began fishing on the public bank with sliding float rigs combined with large balls of groundbait.

With numerous large Catfish regularily topping out in the centre of the lake the angler cast his large baited rigs amongst the hordes of showing catfish.  After waiting for only a matter of minutes line began to be ripped from one of the reels as a Catfish headed towards the far bank at speed. Winding down into the unseen Mekong Catfish saw the rod arched over as it took the full weight of the catfish.
The Mekong Catfish responded by embarking on a series of unstoppable runs stripping yet more line from the tightened spool of the reel.

The Mekong Catfish was surprisingly only 20kg’s in weight and was quickly released after photography.

Further casts to the hot area resulted in more Catfish of a similar size with the angler landing three more fish in quick succession.

With jet lag possibly starting to take effect and the mounting number of Mekong Catfish also adding to the anglers fatigue it was decided to fish for a further half hour before retiring to the hotel.

After making two last casts the angler waited patiently for events to unfold.

Another high speed take soon had Geoff Maynard bent into another monster Mekong Catfish which once again proceeded to try to pull his arm off! The Mekong Catfish on this occasion fought equally as hard and saw the UK angler battling the fish for almost fifteen minutes.

The Mekong Catfish on this occasion was a slightly larger specimen weighing in the 30kg region and was proudly held aloft for the cameras for trophy shots.
After this fish Geoff announced that it was time to call it a day in order to save his aching arms for the next days fly fishing session at Pilot 111 fishing ponds. 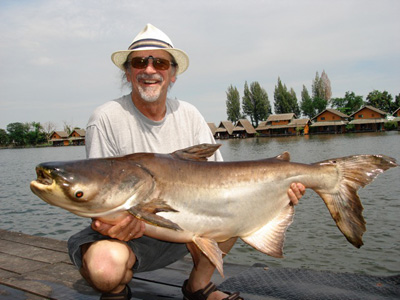