David and Alison from the UK returned once again to fish at the highly prolific Bungsamran Lake in Bangkok for Mekong Catfish.
The anglers chose to fish from the public area and were soon casting large method balls towards showing fish in the central area of the lake.
The UK anglers also fished one rod in the nearby margins close to the underwater supports of the fishing platform in an attempt to hook one of the Giant Siamese Carp which regularily topped in the area.
Straight away the anglers were into fish as the sliding float out in the centre of the lake was pulled under the water by a rapidly departing Mekong Catfish.
The Mekong Catfish gave a good account of itself and charged powerfully towards the far bank.
After battling the Mekong Catfish for over ten minutes the catfish was eventually brought to the waiting landing net.
The muscular Mekong Catfish was quickly hoisted onto the unhooking mat and was estimated to weigh 45lb’s before being released.
Alison was soon into her first Mekong Catfish of the day which also gave a good account of itself by proceeding to strip the reel of line in an attempt to reach the far bank of the lake.
The Mekong Catfish on this occasion was estimated to weigh 35lb’s and was released after a few trophy shots.
Throughout the day the UK team fished extremely well and landed a succession of Striped Catfish on the rod fished to the marginal area.
Further Mekong Catfish also fell to the float fishing tactics with several fish being landed to over 60lb’s during the afternoon.
At the end of the days highly prolific fishing session at Bungsamran Lake in Bangkok the UK husband and wife team had amassed a twenty fish haul of monster fish with Mekong Catfish to 60lb’s plus and Striped Catfish to an estimated 10kg’s.
After finishing fishing at Bungsamran Lake the UK anglers embarked on the next stage of their Thailand fishing holiday and travelled to Ratchaburi in readiness for the next days monster fishing at IT Lake Monsters. 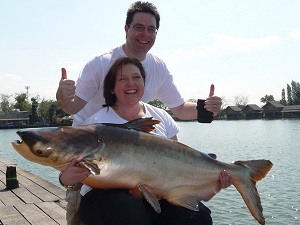