International angler Andreas whilst on a short holiday fishing in Thailand visited Bungsamran Lake in Bangkok monster fishing
On arrival at Bungsamran Lake the angler began fishing for the Mekong Catfish from a stilted fishing bungalow in a quiet area of the lake.
After baiting two rods with a large helping of ready mixed groundbait the angler cast out towards the many showing Mekong Catfish.
It was not long before one of the floats burst into life and began to be dragged across the surface of the lake.
Quickly closing the bale arm of the reel the angler was very soon bent into the unseen Mekong Catfish as it powered off across the lake!
The Mekong Catfish took a further ten minutes before it was subdued and brought to the waiting landing net. On hoisting the Mekong Catfish onto the fishing platform the Mekong Catfish was estimated to weigh 25 kgs.
Further casts towards the centre of the lake resulted in yet more catfish with Mekong Catfish and Striped Catfish all showing interest in the bait.
As the days Mekong Catfish fishing progressed the European angler added more monster fish to his rapidly increasing tally.
The days Mekong Catfish fishing continued in much the same pattern with Andreas experiencing several double hook ups in the later part of the day.
As the days fishing in Bangkok came to a close the European angler had amassed a large haul of Mekong and Striped Catfish topped by a 32 kg Mekong Catfish which took almost twenty minutes to land 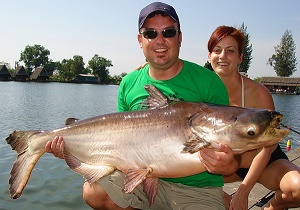