UK angler Dave continued his fishing holiday with a visit to the Maeklong River fishing for the biggest of the Giant fish of Thailand the Giant Stingray.
After fishing extremely hard for the previous two days at both the Ban Pakong and Maeklong Rivers and failing to successfully land a monster fish the angler returned to the famous Area 52 stretch of the Maeklong River.
UK angler Dave persevered with the monster fishing and positioned himself on a wide bend of the tidal river in his continued quest for the Giants of Thailand.
With the incoming tide signaling peak feeding time for the monster fish one of the baits was soon picked up by a Giant stingray.
Dave quickly donned the fighting harness and after clipping up wound down into the giant fish as it moved away with the bait.
The Giant stingray responded by embedding itself into the muddy riverbed causing the UK angler to apply pressure from directly above.
The Giant stingray was soon tamed by the heavy duty Okuma big game fishing equipment and was brought up into the middle layers of the tidal river.
The Giant fish was quickly brought to the waiting net and transported to the riverside where it was estimated to weigh 80kg’s and measured at a width of 1.28m’s.
The monster stingray was released back into the tidal river after a few trophy shots with the proud captor.
With a few more hours left of monster fishing for the Giant stingrays Dave was soon positioned in the productive area waiting in anticipation for the next take.
The take followed shortly after and saw Dave once again attached to yet another Giant fish which proceeded to test his angling endurance.
The freshwater stingray on this occasion was landed in a relatively short time and was estimated to weigh 45kg’s and measured at a width of 1.16m’s.
With the days monster fishing now finished Dave returned to the hotel in readiness for the next part of his Thailand fishing holiday in search of more Giants of Thailand.
The following day would see Dave fishing at Palm Tree Lagoon for yet another of Thailand’s giant fish the awesome Arapaima or Pirarucu. 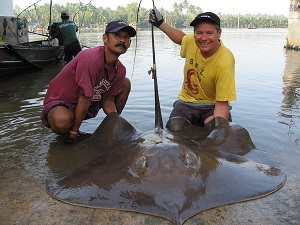