Visiting angler Mark decided on a fishing trip to IT Lake Monsters whilst on his Thailand holiday.
On arrival at the lake Mark was soon casting swim baits towards the many showing predators.
After several slow retrieves the angler was soon bent into a small Pacu which was quickly landed.
Further casts saw more Pacu landed before a succession of Alligator Gar were landed with weights upto an estimated 15kg.
A changeover to bait fishing in the afternoon saw the size of the predators increase rapidly.
In an action packed afternoon Mark landed a series of big Amazonian Redtail Catfish with weights ranging between 15-35kg.
At the end of the day the angler also hooked and lost what was suspected to be one of the large Chaophraya Catfish after a short battle 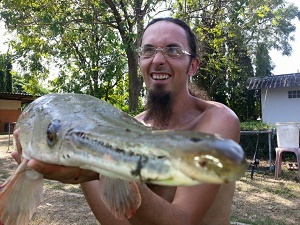