Thailand Predator Fishing at IT

Indonesian angler Adrian continued his Thailand predator fishing holiday with a visit to the highly prolific IT Lake Monsters predator lake in Ratchaburi.
The keen and experienced young lure angler wasted no time in setting up a medium weight lure fishing outfit and was soon casting at the many predators showing out in the lake.
After making several casts towards fish showing at 15 yards the angler was soon attached to his first predator of the day which proceeded to charge off round the lake.
Adrian soon had the monster fish under control and was guiding a good sized Alligator Gar towards the landing net.
After unhooking the predator he was soon into his next monster fish of the day which proceeded to fall off moments later.
Adrian persevered with his lure fishing and began to pick up several more Alligator Gar and Pacu as he expertly worked his lures in various parts of the lake.
After a short lull in action Adrian hooked into a slightly larger predator which stripped several yards of line from the tightened clutch of the reel.
With the rod bent double the young angler battled the unseen predator for several minutes before he could bring the fish under control.
After a further few minutes a large Redtail Catfish surfaced open mouthed and gulping air before making one last dive for freedom.
The Redtail Catfish was finally brought to the waiting landing net and scooped up by the fishing guide.
After hoisting the monster fish from the water the hard fighting Redtail Catfish was estimated to weigh 25kg’s+ and was proudly held aloft for the cameras.
Adrian caught monster fish consistently throughout the day’s predator fishing at IT Lake Monsters taking further Redtail Catfish and other monster freshwater fish after changing over to deadbait in the afternoon.
At the end of the day’s highly successful predator fishing session at IT Lake Monsters, Adrian had succeeded in landing a sixteen fish haul of monster fish topped by several good sized and extremely hard fighting Redtail Catfish. 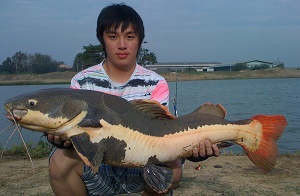