The second day of Keiron’s Thailand fishing holiday started with the anglers casting artificial lures into various parts of the lake. Both anglers cast a variety of lures including Rapala and Cultiva lures towards showing fish and were both rewarded by a succession of hungry predators. Keiron and Julia both caught several Alligator Gar’s to 15lb’s+ in addition to banking Pacu and sharp-toothed Catfish. A changeover to deadbait’s in the afternoon saw the fishing really turn on with the anglers landing a succession of Redtail Catfish with weights ranging between 15-30kg’s.
The Thailand Predator fishing fishing continued throughout the afternoon with the anglers landing a pair of striped Sorubim to 20lb’s.
Steadily feeding lumps of chopped mackerel kept the predators interested and saw a very large Barramundi being banked by Julia. Julia also succeeded in landing a very much sought after Black Ear Catfish further adding to the variety of their rapidly increasing catch.
Both anglers also caught plenty of Asian Redtail Catfish with relatively low weights upto 16lb’s in addition to adding yet more Redtail Catfish to their haul of monster fish.
At the end of the days Thailand predator fishing the anglers had amassed a thirty fish haul composed of various weird and wonderful monster fish species topped by some very good sized Redtail Catfish and a rarely seen Black Ear Catfish 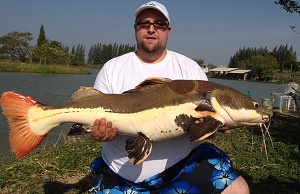