On the second day of their Thailand predator fishing holiday Lee and his Dad travelled to IT Lake Monsters in search of Arapaima, Redtail Catfish and other monster fish. The days Thailand predator fishing began with both anglers fishing with medium weight lure fishing outfits which they continually cast towards the many showing predators. It was not long before both anglers were hooked up with Pacu which acrobatically threw themselves from the water trying to shed the anglers lures. Further casts produced several Alligator Gar’s which aggressively attacked the anglers artificial lures cast amongst them.

The anglers enjoyed fast and furious sport with several more fish each before lunch time when they changed over to deadbaits.

After changing over to deadbaits sport took a sharp upturn with the Redtail Catfish ravenously picking up their mackerel fillets as fast as they could get them in the water!
During the next few hours the anglers hauled for all they were worth landing over thirty different Redtail Catfish with weights between 20-35kg’s.

In addition to the enormous amount of Redtail Catfish the anglers landed several other species were also landed with Striped Sorubim to 20kg’s, Spotted Sorubim and also a bonus Arapaima of an estimated 35-40kg’s.

At the end of the days highly productive predator fishing session the anglers had succeeded in landing an estimated 300kg’s of fish making the visit one of the biggest hauls ever landed at IT Lake Monsters! 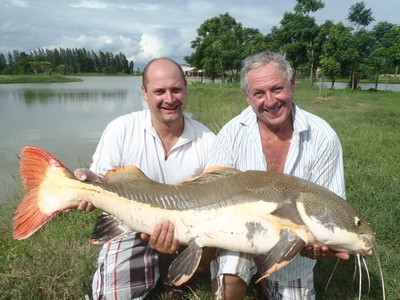 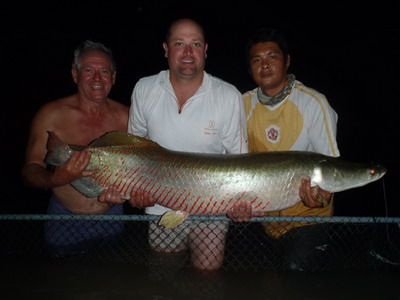