US angler Li continued his Thailand fishing holiday with a visit to the Pilot Ponds near Bangkok fishing for Snakehead and other predators.
An early start at the ponds saw the angler casting a lure into the Snakehead pond at clearly visible fish.

At first the wily Snakehead resisted the temptation of the lures and moved off into the shadows.
Continued attempts soon started to cause some competition amongst the fish and a strike soon followed.

On setting the hooks the fish threw its self clear of the water before diving back down into the pond.
The fish was quickly subdued after a few short head shaking runs and netted by the guide.

The Giant Snakehead weighed around 4kg and was released after a few pictures.

With the fish seemingly showing no further interest in his lures the angler moved onto the adjacent Barramundi pond.
After changing lure pattern the angler proceeded to land a series of Barramundi ranging between 3-5kg making a pleasant end to the day fishing at Pilot Ponds. 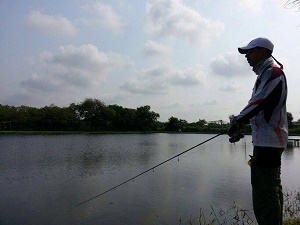 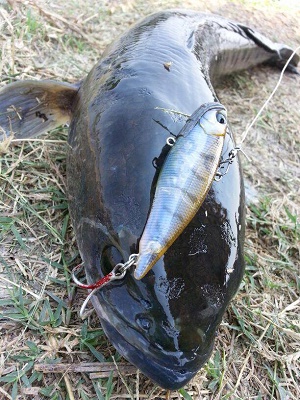