The second day of Paolo’s Thailand Giant Snakehead fishing holiday saw the anglers both at the lake at dawn.
On arrival at the lake the anglers were greeted by an overcast sky and windy conditions making lure fishing for the Giant Snakehead a much tougher proposition.
To further confound the fishing situation a steady drizzle descended upon the lake bringing with it a cloudy mist which clung to the tree tops for the first few hours of fishing.
Although conditions were far from perfect the anglers persevered with their fishing and donned water proof smocks to stay dry.
The captain of the boat speedily transported the anglers to a quiet bay in the far corner of the dam with a mass of twisted tree systems jutting out at angles from the waters surface.
After quietly paddling into casting distance the anglers watched the water for signs of Giant Snakehead.
After quietly observing several rises amongst the rotting trees both anglers cast gently towards the trees feathering the lures down on impact.
Slowly retrieving his lure Paolo varied his rate of retrieve whilst intermittently jerking the rod top in an effort to induce a take.
On only the second retrieve the Cultiva lure was savagely attacked pulling off a yard or so of line from the perfectly set clutch.
Swiftly setting the hook Paolo acted quickly furiously playing the Giant Snakehead away from the underwater obstruction aided by the boatmen and his paddle.
After a spirited five minute battle Paolo slowly brought the Giant Snakehead next to the boat where it was hoisted aboard with the aid of the boca grip.
The Giant Snakehead weighed just over 3.5kg’s and was quickly released after photography.
Paolo’s friend persevered for the next hour losing two small Snakehead due to hook pulls. After changing location to another flooded forest the angler finally succeeded in hooking a decent sized Giant Snakehead which took a liking to his Cultiva lure.
The Giant Snakehead with very subtle markings was quickly brought out of the danger zone where it was allowed to plough about in open water for a few minutes.
After several fraught moments with the boca grip alongside the boat the Giant Snakehead was finally hoisted aboard and found to weigh almost 5kg’s.
With changeable weather conditions varying between wind, rain and heavy cloud the anglers continued to fish.
After several further hours fishing and only small Snakehead showing interest in their lures the anglers once again retired to their lodgings 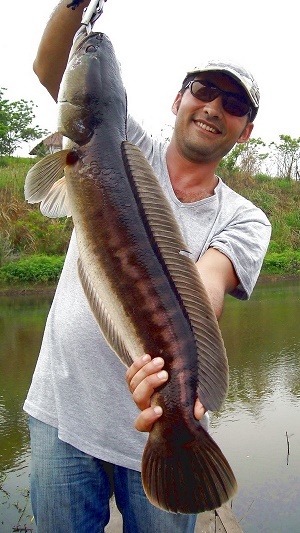