After spending a particularly productive day lure fishing in Thailand for Barramundi Indonesian lure fishing enthusiast Adrian decided to make a quick detour to Pilot 111 fishing ponds.
On arrival at the Pilot 111 fishing ponds complex Adrian decided to fish on one of the fishing ponds stocked exclusively with the highly ferocious Giant Thailand Snakehead.
Expertly casting his artificial lures to the many showing fish soon saw the predators taking interest with several fish chasing the lure before veering off at the last moment.
After changing his lure pattern to a slightly smaller size Adrian once again began to make a series of casts, slowly covering the water in a quiet corner of the pond.
Adrian’s next cast landed perfectly and as he quickly retrieved his lure a Giant Thailand Snakehead smashed into it causing a massive explosion in the water!
The anglers light weight spinning outfit bent over double as the Giant Snakehead dived into the depths to avoid capture.
After several more frantic moments the Giant Snakehead was brought to the bank where it was expertly gloved by the guide.
The Giant Snakehead was estimated to weigh 2.5 kg’s and was held up proudly by the captor for a dew quick trophy shots before release.
Adrian continued to lure fishing at the Snakehead fishing ponds for a further hour and succeeded in landing several more Giant Snakeheads weighing between 1.25 – 2kg’s. 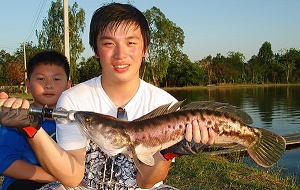