After fishing in Bangkok at Bungsamran Lake for two days the Ukrainian anglers decided to visit the Maeklong River fishing for Giant freshwater stingrays.
Timing their stingray fishing trip to coincide with the early morning tide the anglers were soon positioned in a wide section of the Maeklong River with baits placed across the river.
After retrieving a few of the baits to find they had already been mouthed by Giant freshwater stingrays, fresh baits were impaled onto the large circle hooks and dispatched back onto the depths of the river.
As the tide started to reach its optimum level a fast take saw the anglers connected to an unseen river monster.
The unseen fish on this occasion seemed most unlike a stingray embarking on a fast run in mid water.
After effortlessly pulling the fish up the surface it was clear that a small Black tip reef shark had wandered into the tidal river.
After unhooking the Black tipped reef shark the heavily frayed leader was changed and once again rebaited.
With the tide still relatively high and things looking good for a bite it did not take long for their chosen quarry to pick up one of the baits.
Volodymyr immediately donned the fighting harness before winding down into the unseen Giant freshwater stingray.
The heavy okuma stand up rod was soon being bent into its fighting curve as the freshwater stingray powered off upstream for several metres before going to ground in the muddy substrate.
Continued pressure from applied from directly above the stingray soon took its toll causing the Giant freshwater stingray to once again embark on a powerful run.
After just over ten minutes Volodymyr handed the rod over to his son Anton who took charge of the rod and continued to battle the stingray.
Several more powerful surges by the stingray had the angler holding on tightly as the boat was at times towed upstream by the Giant freshwater stingray.
After almost twenty minutes the Giant freshwater stingray as brought up to the surface where it thrashed its tail wildly as it was brought over the waiting net.
The Giant freshwater stingray was quickly brought to the riverside where it was estimated to weigh a hefty 70-75kg’s.
After a few quick trophy shots the Giant Freshwater Stingray was released back into the river before the anglers returned to the productive fishing area.
After fishing uneventfully for another hour with no further stingray action and the tide beginning to ebb back towards the Gulf of Thailand the anglers finished fishing content with catching their monster stingray. 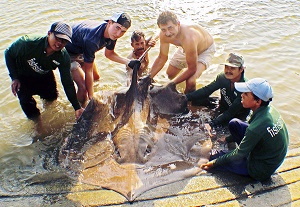