Japanese angler Takuya visits Thailand on a fishing holiday stingray fishing at the Maeklong River.
On arrival at the tidal river the anglers positioned themselves on a wide bend in the famous Area 51 section of the Maeklong River.
With the impending tidal influx due in thirty minutes large marbled sand goby were impaled onto 10/0 Owner circle hooks and quickly dispatched into the depths.
The heavy duty Okuma stand up rods were positioned on both sides of the boat with the mainline tightened up against the weight of large 1kg weights anchored on the muddy riverbed.
After setting the clutch on the Okuma Makaira multiplier reels the anglers sat back and awaited the arrival of the giant stingrays.
With the tidal river quickly filling up and water levels slowly creeping up the muddy banks a series of floating vegetation began to be pushed up the river.
Masses of floating palm leaves, fallen trees and plant matter began to foul the lines making fishing highly problematic.
Each floating obstruction was carefully steered away from the bow string taught lines with long poles and oars allowing fishing to continue uninterrupted.
A distinct ticking of a clutch soon saw the anglers excitedly donning the body harness in readiness to do battle with a Giant freshwater stingray.
Takuya took first turn on the rod and wound down slowly into the unseen prehistoric predator causing the heavy stand up rod to bend down towards the water.
Pressure was slowly applied from directly above the stingray causing the roller guides on the rod to creak under the strain.
The giant stingray responded by stripping several yards of line from a tightened clutch before once again clamping onto the muddy river bottom.
The boat was once again repositioned over the unseen stingray and the rod once again took on its full parabolic curve.
Line was slowly cranked onto the Makaira multiplier inch by inch in an effort to tire the unseen stingray.
After a further twenty minutes anther angler changed over and took up fighting position with the rod.
More and more pressure was applied to the stingray causing it to finally release its grip on the muddy riverbed.
The roller guide on the rod tip sprang back violently as the stingray momentarily moved up in the water causing the angler to wind furiously on the multiplier to keep the stingray off of the bottom.
Line began to be ripped from the tightened clutch as the stingray moved powerfully upstream dragging the boat behind it at a rate of knots.
The anchor was quickly pulled up and the engine was started as the captain, expertly span the boat round to follow the stingray.
The boat was soon positioned above the unseen stingray where the Japanese anglers resumed battle once again.
The battle continued for a further hour seeing all of the Japanese anglers taking turns to fight the stingray.
After a gruelling one and a half hours into the battle disaster struck as the rod sprang back causing the angler to fall backwards.
On winding in the end tackle an inspection of the hooklength showed that it had finally broken after one and a half hours of grating from the stingray’s abrasive tail.
The anglers wasted no time in returning to the productive area and once again repositioned the baits on the hot spot.
Ten minutes later one of the rod tips was violently jerked downwards causing the reel to let out a shriek.
Takuya once again donned the fighting harness and carefully positioned the rod butt in the gimble.
The stingray on this occasion was a much smaller specimen and was soon overpowered by the heavy big game fishing gear.
After a short ten minute battle the stingray was hauled through the surface layers and into the waiting net.
The freshwater stingray was measured at a width of 1.10m’s with a length of 2.87 from rostrum to the tip of its tail.
The small male Giant freshwater stingray was estimated to weigh 40kg’s and was released after a short examination by veterinary scientists.
After releasing the stingray the anglers returned to the fishing grounds to make the most of the tide.
After stingray fishing for a further hour and with the tide started to recede a clicking on the clutch signaled the final take of the day.
A short fifteen minute battle saw the stingray landed once again overwhelmed by the big game fishing equipment and brought to the riverside.
The giant stingray on this occasion was identified as a male and was measured at a width of 1.29m’s with a length of 3.47m’s.
After a short examination by the scientists the stingray was carefully released back into the tidal river marking the end of the days stingray fishing session. 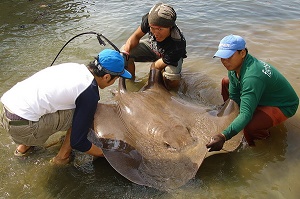