Another visit to the Maeklong River saw Benny from Palm Tree Lagoon and an English client fishing for Giant freshwater stingrays.
Floats were positioned at intervals across the tidal river in readiness for the incoming tide
With the water level slowly rising, things looked good for a bite.
As the water level reached its optimum depth one of the floats burst into life.
On winding down into the stingray the rod was pulled into full curve as the unseen stingray moved off with the bait.
A forty minute battle followed which saw the fish stuck to the bottom numerous times.
On possibly the fifth or sixth attempt the Giant freshwater stingray was brought to the net where it was secured against the side of the boat.
At the riverside the Giant freshwater stingray was measured at a width of 1.6m and estimated to weigh 140 kg+.
Although the anglers fished on for a further few hours, no more stingrays were landed on this occasion 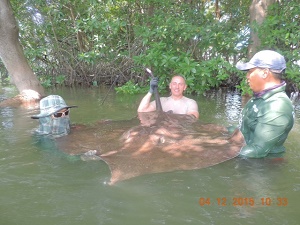