The second day of the TBS stingray fishing film saw the Japanese anglers fishing a different area of the mae klong river in search of bigger stingrays.
After a slow start a strong and determined take saw the fishing with TBS Japan  anglers attached to a much larger Giant freshwater stingray.
With the heavy duty stand up fishing rod being bent into an alarming curve it was clear the stingray on this occasion was a bigger one.
The stingray embarked on a series of powerful runs, towing the fishing boat downstream.
With the stingray now pulling the full weight of the boat it soon went to ground, firmly embedding itself into the muddy substrate.
After repositioning the boat above the stingray the angler applied as much pressure on the fish seemingly to no effect.
Continued pressure for a further fifteen minutes finally moved the stingray off the bottom causing the rod tip to bend violently towards the water.
The stingray continued to move downstream as the battle reached over an hour.
Almost eightly minutes after capture the Giant freshwater stingray was finally brought off the bottom for the last time and hauled over the net.
The monster Giant freshwater stingray was examined by scientists from VRMC and measured at a width of 2.10m.
The large female Giant freshwater stingray was allowed a few minutes for recovery before being released back into the Mae Klong River. 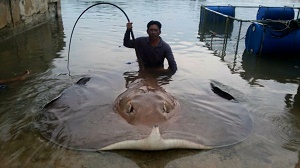