Yet another visit to the Maeklong River in Thailand saw Tim Webb from Palm Tree fishing in the tidal reaches of the Maeklong River.
It wasn’t long before one of the floats was away and Tim was soon attached to a Giant freshwater stingray.
The fight was pretty much one sided as Tim quickly overpowered the stingray on the big game fishing gear.
On bringing the stingray to the surface it was quickly brought into the boat and photographed.
The Giant freshwater stingray was only a small one weighing a mere 15kg and was quickly released.
An hour later Tim was once again into another giant freshwater stingray which was landed after a ten minute battle.
The stingray on this occasion weighed 30kg and was released shorty after photography.
Tim fished for the rest of the afternoon and was rewarded with one last fish which was estimated to weigh 40kg’s and was beaten after a short but spirited battle.
Having reached his three fish limit Tim ended his days stingray fishing trip and made the short trip back to Palm Tree Lagoon. 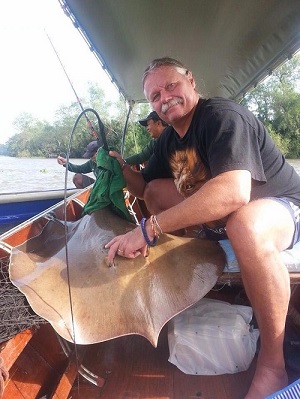