English angler Nick booked a stingray fishing trip during his Thailand holiday at the Maeklong River.
On arrival at the river he was soon on board a boat on his way to the nearby fishing grounds in search of Giant freshwater stingrays.

After positioning baits at various intervals across the tidal the river the angler sat back and waited for events to unfold.

With the incoming tide pushing up water levels on the river it was not long before one of the floats burst into life signalling the arrival of the stingrays.

Winding down into the unseen stingray the rod slowly bent over towards the water as it took the strain of the Giant freshwater stingray.

The battle lasted only a few minutes with the stingray easily overwhelmed by the heavy duty big game fishing equipment.

After quickly wrapping the stingrays barb the angler got a few trophy shots before slipping iot back into the river. The stingray was estimated to weigh 20kg’s.

The boat was quickly repositioned and it was not long before another stingray picked up one of the baits.

On winding down into the fish a similar battle followed with yet another small Giant freshwater stingray of around 25kg’s being brought up quickly from the bottom.

A quiet spell followed for the next hour or so before another more pronounced run fell to a bait fished just off the central channel.
On this occasion the fish displayed much more power and gripped onto the bottom several times before it was finally winched up from the depths.

The Giant freshwater stingray was estimated to weigh 40 kg’s and was released after a few trophy shots. A great outcome for his stingray fishing trip. 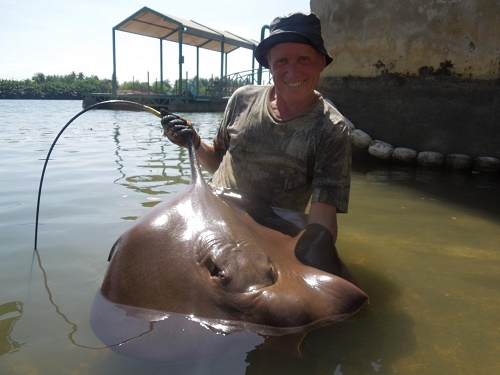