Tom Parker a returning client and friend fished the awesome I.T Lake Monster in Ratchaburi Thailand.
Tom used a variety of deadbait and lure fishing tactics to tempt a succession of hungry predators!
Included in Toms catch were lots of exotic catfish species including Sharptooth Catfish and Redtail Catfish as well as some nice Arapaima reaching weights of 40 kg in addition to Barred Sorubim Catfish and a bonus Giant Snakehead.
Tom was guided in his fourteen fish capture by Boy who switched tactics between lure fishing and bait fishing half way through the day. 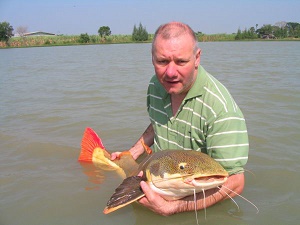