Li from the USA continued his Thailand fishing holiday with another visit to Bungsamran Lake in Bangkok.
The angler fished from the public area and cast large balls of bait on feeders towards showing fish.

As per usual the catfish were in the mood for bait and the float soon was pulled under by the first fish of the day.
A short but powerful battle followed as the angler played yet another Mekong Catfish.

The fish was beaten after a few minutes and quickly unhooked in the net before release.

Further casts to the many showing fish resulted in more takes from the hungry catfish with fish ranging between 10-20kg.

The days fishing at Bungsamran continued in much the same manner with the angler landing a succession of hard fighting Mekong Catfish.

After a short break for lunch the angler commenced fishing once again and was soon rewarded by what would turn out to be the biggest fish of the day.
After playing the Mekong Catfish for almost fifteen minutes a lovely Mekong Catfish of 30kgs was brought to the net.

The heavily built and muscular catfish was proudly displayed for the camera before being released. 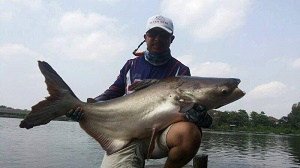