A visit to Phatum Thani province on the outskirts of Bangkok saw the Fishsiam team fishing in the Nakon Nayok canal.
Fishing with medium weight spinning rods and reels the anglers offered small shrimps and prawns on Owner hooks attached to short fluorocarbon leaders.

Casting single baits out into the central channel of the canal the anglers patiently waited for events to unfold.
A series of gentle plucks on the tip of one the rods soon alerted the anglers to fish in the immediate area of the bait.

With the tip of the rod silently knocking the anglers quickly set the hook into the unseen fish.
A spirited Thick Spined Catfish was quickly swung towards the bankside where it was carefully unhooked and returned to the canal.

Further Thick Spined Catfish followed with all of the anglers catching several of the fish and taking great care in unhooking the sharp finned catfish.

Further casts produced a mixture of native catfish and several Tilapia to relatively small sizes which all took a liking to the shrimp and prawn baits.

Moving position further along the canal resulted in a quiet period for the next hour with a series of annoying plucks at the baits resulting in stolen hookbaits.
After rebaiting the rods the anglers cast out into the central channel of the canal and baited lightly with chopped prawns.

After fifteen minutes one of the rods started to knock as line suddenly began to be pulled from the spool of the reel.
Closing the bail arm saw the rod bent over as a slightly larger fish hugged the bottom of the canal.

A short five minute battle followed which saw the fish fighting every inch of the way to the waiting landing net.
Seconds later a small stingray broke through the surface layers of the canal wildly flailing its small tail in an attempt to cut through the 20lb fluorocarbon hooklength.

The small stingray was quickly scooped up into the net before being gently placed on the grassy verge at the side of the river.
After a few moments the anglers identified it as being a White Edged freshwater stingray from a distinctive white line spanning the entire diameter of the stingray.

The White Edged Freshwater stingrays Nakon Nayok was estimated to weigh 4kg’s and was released after a short photo session.

The anglers continued to fish throughout the afternoon catching one more White Edged freshwater stingray of a slightly smaller size.
In addition several more Thick Spined Catfish were captured with estimated weights of 200-300g’s. 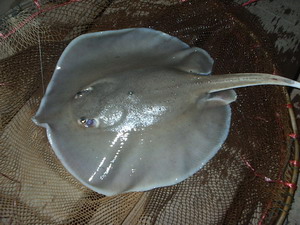