Polish angler Piotr and his Russian companions continued their Thai fishing holiday with a visit to Khao Laem Dam in Kanchanaburi. After successfully landing Giant freshwater stingrays at the Maeklong River and a massive 350 lb Mekong Catfish from Palm Tree Lagoon the anglers now switched their attention to lure fishing for the Giant Snakehead, Jungle Perch and various other native predators.
The anglers made an early start and were soon casting lures towards submerged trees in a deep corner of the lake.
After several casts towards the snaggy tree line a large swirl saw a predator hit the topwater lure. The fish managed to reach the snags and was lost seconds later.
Further casts saw more interest in the lure and it was not long before a small Giant Snakehead was brought to the boat.
After releasing the Giant Snakehead of 2 kg’s the swim fell silent and the angler decided to move location.
The next fishing area was close to a large limestone cliff face dotted with vegetation which offered deep water close in with a boulder strewn bottom.
Casting with accuracy towards the overhanging vegetation soon saw the anglers land a brace of Jungle Perch with weights of 2-2.5kg’s which were quickly photographed before being released.
Another move to a different location saw the anglers land one more Jungle Perch before light faded and they returned to the comfort of their floating bungalow for the night. 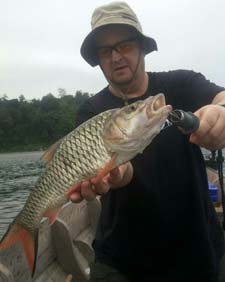