On his fourth day of his Thailand fishing holiday US angler Li decided to go fishing for wild freshwater stingrays at the Maeklong River. Positioning himself on a wide section of the Maeklong river the angler waited patiently for the incoming tidal influx. With floats positioned at various points across the river the anglers timing was spot on and after only one hours fishing a small freshwater stingray was landed estimated to weigh 40kg.

Soon the river level was at its optimum height and things looked good for another take.
Another 40 kg Giant freshwater stingray was landed shortly after an uneventful fight on the heavy duty fishing equipment.

With only one hour of fishing time left one of the floats started to move slowly upstream.
On winding down into the Giant freshwater stingray the rod was pulled down to the waters surface as it took the full weight of the stingray deep below.

A gruelling battle followed which saw the angler skilfully holding onto the rod and keeping the Giant freshwater stingray off the bottom for a fair part of the battle. After reaching a stalemate the boat was re positioned directly over the stingray and full power was exerted through the rod.

After making the freshwater stingray safe it was transported to the riverside where it was estimated to weigh 120kg-130kg. 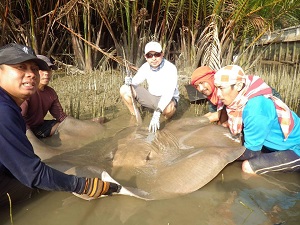