European angler Fredrik started his Thailand fishing holiday with a trip to the Maeklong River, Wild stingray fishing.
On arrival at the tidal river Fredrik was soon positioned on a wide bend with baited floats at various points across the river.

With the incoming tide due in the coming hours the angler waited patiently for the stingrays to arrive and soaked up the beautiful natural surroundings.
An hour or so later one of the floats burst into life and the angler was soon connected to his first wild Giant freshwater stingray.

Expertly the captain gunned the engine and moved the boat back into position above the unseen stingray.

The stingray continued to put up considerable resistance and regularly clamped onto the riverbed creating an unmovable force deep below.

Fredrik continued to pile on the pressure from above and after almost an hour finally manged to bring the stingray off the bottom.
The next ten minutes passed painfully slow as the Giant freshwater stingray glided around under the boat.

After a few trophy shots the Giant freshwater stingray was released back to the wild waters of the Maeklong River. 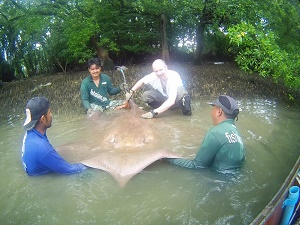