Day Two of a one week Thailand stingray fishing expedition in search of Giant freshwater stingray saw the Fishsiam team fishing a wide bend in the lower reaches of the river.
An early start to coincide with the incoming tide saw Hirosumi Yamaguchi from NHK channel in Japan and Dr.Zeb Hogan observing events as the team battled an unseen Giant freshwater Stingray.
After a relatively short fifteen minute battle a small Giant freshwater stingray was safely netted.
The stingray was identified as being a small male and was estimated to weigh 30kg’s.
Dr.Zeb Hogan carried out a scientific examination tagging the fish with acoustic and external tags.
The freshwater stingray was released soon after photography.
With the first tide rapidly receding the team decided to stop fishing and return with the coming of the second tide.
Some hours later the river began to rise with the incoming tide and the Fishsiam team awaited further developments.
A tentative take on one of the rods fished into the main flow saw the anglers once again bent into another Giant freshwater stingray.
The heavy duty big game equipment easily bringing the fish off the bottom after a matter of minutes!
Moments later a small freshwater stingray of an estimated 35kg’s was brought alongside the boat and netted.
Whilst attending to the stingray another rod being fished into the main flow suddenly burst into life as the mainline literally evaporated off of the multiplier.
On winding down into the Giant freshwater stingray it was clear that this was not a small fish!
As the stout stand up rod was pulled into full battle curve the fish responded with an awesome display of power literally towing the boat almost 100m’s on its initial run.
Trying to regain some form of control the boat was repositioned over the monster fish in an attempt to raise the fish from the bottom.
Time after time the massive Giant freshwater stingray moved across the riverbed dragging the boat in its wake.
With the clutch set at its highest setting on the Accurate ATD reel the anglers once again attempted to prize the monster from the riverbed.
All too soon an hour had passed with the anglers and fish taking turns in gaining line only for the line to be ripped from the reel once again.
With the light fading and the fish still not looking any closer the anglers resigned themselves to a long drawn out battle.
With the coming of the second hour the tide began to recede causing thousands of gallons of water to move back towards the sea.
The added force of the water by no means helped the anglers taking with it all sorts of flotsam and debris.
After clearing various obstructions from the bow string tight line the anglers continued to do battle with the monster fish.
The unseen Giant freshwater stingray some eighteen metres below moved once again steadily upstream causing the anglers to once again reposition the boat.
After suddenly halting the fish momentarily came up off the bottom sending the rod springing back.
Winding down hard into the fish saw the fish once again move a further 80m’s upstream dragging the boat behind it.
Another boat was tied to the boat in an attempt to regain stability and help tire the unseen leviathan’s powerful runs.
It was all too soon before yet another hour had passed with the fish still seemingly unmoved by any of the anglers attempts at extraction.
With increased boat traffic on the river due to local markets in the vicinity opening the situation became even more urgent.
During the course of the battle the fish had moved on numerous occasions on powerful runs of upto 100m’s, the last three hours had been spent fighting the fish in an area of no bigger than 500 sqm!
Further attempts to move the unseen monster fish continued to be met by an unmovable weight causing the roller guides on the rod to creak under the incredible pressure.
With the long protracted battle raging on crowds of onlookers stopped on passing boats to witness the battle.
It was almost four hours after the initial take when the fish was finally brought off of the muddy riverbed into mid water.
With it being possibly the first and last chance to finally land the monster Giant freshwater stingray the angler wound furiously to regain control of the fish.
On seeing the monster surface next to the boat the anglers and film crew fell silent.
The massive freshwater stingray was pulled over the net but the anglers were unable to successfully net the fish.
Several more attempts were required before the fish was safely brought into the net and quickly secured to the side of the boat.
On arrival at the bankside the fish was quickly identified as the same record breaking Giant freshwater stingray that Ian Welch had captured exactly one month previously.
The fish was quickly examined by Dr.Zeb Hogan before being released.
The fish seemed to be slightly down in weight since its previous capture and was estimated to weigh 300 kg’s+.
All events were filmed by Hirosumi Yamaguchi for a forthcoming production on NHK which will be aired in the coming months 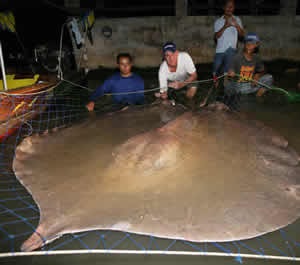