Ian Welch and the Fishsiam team land the largest freshwater fish ever caught on rod and line!

World record Stingray caught in Thailand by Ian Welch Soon after his arrival Ian would witness a truly enormous Giant freshwater stingray being caught from the Ban Pakong River of over 180kg’s. After witnessing such a colossal fish Ian would not have dreamed of events that would take place the following day.

An early morning start saw Ian and the team traveling to the Maeklong River in Samut Songkran province in Western Thailand. The team fished extremely hard throughout the day catching Giant Freshwater Stingray with weights of 40kg, 45kg and 65kg’s from various areas of the river. All fish that were caught were examined by Dr.Zeb Hogan and a top Thai veterinary surgeon with accurate measurements and weights being recorded in addition to the attachment of numeric tags externally to the prehistoric fish.

With still a few hours of fishing time left Ian returned to the river in search of more Giant Freshwater Stingray. Later in the afternoon Ian would go on to hook a much larger fish that would require every ounce of his strength and angling ability. After an epic ninety minute battle a Giant Freshwater Stingray was finally brought alongside the boat.

The enormous leviathan with a width of over 2 metres was safely secured before being brought back to the waiting scientists at the riverside. The fish was observed to be heavily pregnant and it was decided not to attempt to weigh the Monster fish.

After a thorough scientific examination by Dr.Zeb Hogan and the visiting Thai veterinary surgeon the fish was released back into the river.

Scientists present at the capture have estimated the Giant freshwater Stingray to weigh an incredible 265kg+ making it the largest freshwater fish ever landed on rod and line!

Whilst fishing with Dr.Zeb Hogan and the National Geographic production crew the Fishsiam team successfully captured and released sixteen different Giant freshwater stingrays.
The Fishsiam team is now engaged in a two year research project concerning Giant freshwater Stingray populations in several Thai rivers and is working closely with Dr.Zeb Hogan and Thai scientists in an effort to gain a greater understanding of this prehistoric predatory fish. 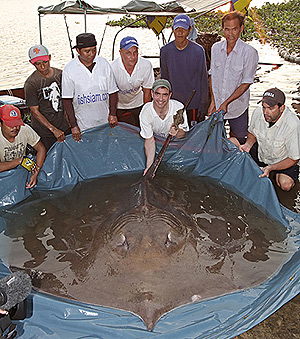