The National Geographic team joined the Fishsiam team on a Thailand stingray fishing trip to the Ban Pakong River in search of Giant freshwater stingray.
Eminent fish biologist Dr. Zeb Hogan and Nat Geo news writer Stefan Lovgren joined the team for a scientific expedition to record data concerning the mysterious Giant freshwater stingray in Thailand.
A small male Giant freshwater stingray was landed after a relatively short twenty minute battle which was estimated to weigh 40kg.
After recording measurements and photography the creature was safely released back to the Ban Pakong River by the team with the assistance of Zeb Hogan.
After several aborted takes another Giant freshwater stingray was captured with an estimated weight of 50kg.
The stingray was identified as being another small male with a 1m+ wingspan and was found to be in immaculate condition.
At some time in the afternoon Brendan hooked an extremely large fish which tested the anglers and their tackle to the absolute limits!
With the battle approaching forty minutes the line finally parted and the unseen monster was gone!
The entire days events whilst stingray fishing at the Bang Pakong River were captured on film and will soon be appearing on our video page 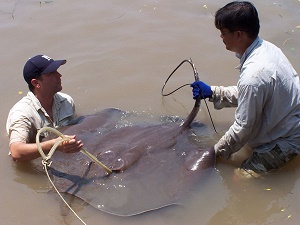