Fishing Now Nam Lake in Bangkok for carp and catfish allows the visiting angler the chance to fish for various monster fish species found in Thailand. 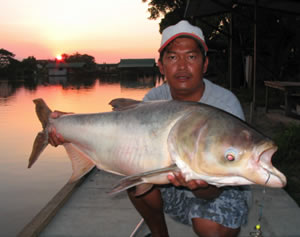 This venue is a mature commercial fishery situated in an outlying district of Bangkok which has a large stocking of Thai monster fish species. Thailand carp fishing at this venue has produced some very large Giant Siamese Carp to our clients weighing 50kg’s+ in addition to producing a variety of other Thai carp and catfish species.The lake also holds a significant head of Big Head Carp to ver 30 lb’s in addition to Silver Carp to 20 lb’s and Julien’s Golden Prize Carp to 25 lb’s and a few rarely seen Koi Carp and Common Carp to 15lb’s.Now Nam near Bangkok also holds a small head of large Mekong Catfish with weights reaching a reputed 100 kg’s in addition to holding various other lesser exotic species such as various Featherback species and Marbled Sand Goby’s
The fishery is situated a short forty five minute drive from the centre of Bangkok in an outlying district f the city.On arrival at the lake anglers will be greeted by a narrow elongated lake nestled amongst the houses of a quiet residential area. The fishery is a well stocked commercial fishery which is favoured by local anglers and allows fishing from one sheltered fishing platform which runs along the entire length of one side of the fishery.Various angling techniques can be used whilst fishing in Bangkok which include float fishing, method fishing and predator fishing with small ornamental live baits for the many Featherback species. 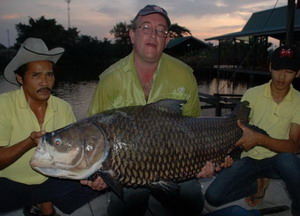 Predator fishing is also possible at this fishery for some of Thailand’s smaller predatory species with freelined ornamental livebaits and wobbled livebaits scoring well with the predators on a regular basis. Fishing in Bangkok at this lesser known venue allows the angler to fish for a wide variety of Thai carp species such as Giant Siamese Carp, Silver Carp and Big Head Carp not to mention the rarely caught Common Carp and Koi Carp.Fishing here is at slightly slower pace than a lot of other lakes in Thailand and the lake very rarely receives a great deal of angling pressure.

Now Nam Lake is favoured by local anglers who regularly descend on the venue at weekends when it can become crowded. We recommend visiting this venue mid week to avoid the crowds. Carp fishing at this lake can be highly productive and regularly sees anglers’ landing multiple monster fish hauls of carp and various other monster fish species when fishing over large beds of bait.

Carp fishing at Now Nam in Thailand is an ideal choice for carp anglers choosing a Thailand fishing holiday and offers the angler the opportunity to catch a wide variety of carp and other freshwater monster fish species. On your arrival at the lake the angler(s) will be equipped with three rods, three Shimano reels, alarms, all terminal tackle and 50kg ‘Lam’ local groundbait and all bait additives. This fishery is a mature eight acre lake and highly prolific water that produces multiple catches of various Asian carp and catfish species on a regular basis.Fishing at this venue is restricted to one bank with the out of bounds bank bordered by a residential area.Anglers fishing at the lake will encounter numerous species of Asian carp with Giant Siamese carp which have been caught to sixty kilo’s, Bighead carp, Rohu and various other cyprinids. In addition Now Nam holds a large head of Mekong catfish with weights believed to be close to one hundred kilo’s. A Fishsiam guide will be in attendance throughout the entire days angling to assist with all photographic and netting requirements in addition to any other angling requirements.The duration of our trips to this venue is eight hours after which the angler(s) will be returned by air-conditioned minibus to your Bangkok hotel.

Fishsiam offers daily fishing trips to Now Nam Lake in Bangkok in addition to weekly fishing holidays with various accommodation options.Fishing trips to Now Nam can also be combined in our tailor made fishing holidays designed to meet the visiting anglers specific angling requirements.
Please note that due to serious problems caused by flooding we are currently unable to run fishing tours to this venue.

Contact Us for information on alternative Bangkok fishing venues using the button below.