Jakub Vagner is a Czech born adventure fisherman who has travelled the world in search of monster fish. Jakub Vagner is the host of several highly acclaimed fishing shows most notably ‘Fish Warrior’ and ‘Jukub Vagner Big Fish Man’ which have aired on Discovery Channel and Quest TV.

In 2015 Fishsiam was approached by a TV production company working on a new show for Discovery called Big Fish Man with Jakub Vagner.

The start of the trip saw Jakub embarking on a journey down the Chaophraya River in search of the legendary Giant freshwater stingray.

Accompanied by Fishsiam guides the adventure angler navigated his way downstream to the gulf of Thailand before meeting scientists from Chulalongkorn University to assist in Giant freshwater stingray research at the Maeklong River.

Jakub Vagner with only limited fishing time at his disposal caught several Giant freshwater stingrays in the first few days of his fishing adventure at the Mae Klong River, unfortunately the stingrays were all relatively small in size with no monsters making an appearance for the cameras. 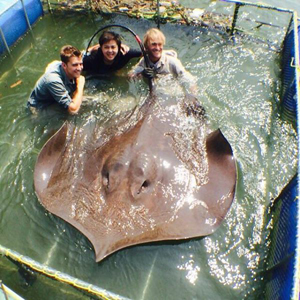 The Giant freshwater stingray was estimated to weigh 160-170kg and was released after a scientific examination by Dr. Nantarika Chansue and the VRMC team from Chulalongkron University.